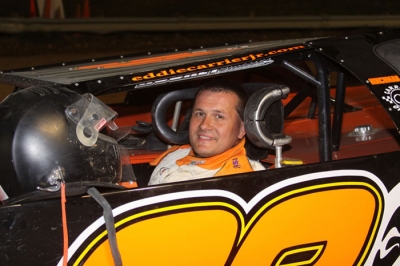 The victory didn’t come easy for Carrier, who had to come from the eighth-starting spot to top the stout field of Late Models. | Slideshow

"I drew that eight (pill) and thought, 'Aww no, my job just got harder,' ” Carrier said after his victory. “We've had some bad luck lately, so maybe this will turn it around. We will just keep a diggin' and working harder, and see what happens. It's good to be here in victory lane."

Jeep Van Wormer of Pinconning, Mich., started from the pole and took the early lead over Zack Dohm of Cross Lanes, W.Va.

Duane Chamberlain of Richmond, Ind., quickly advanced to the second position as Carrier stormed up to fourth. Carrier immediately moved to third after a lap-eight caution and began to challenge Chamberlain for second.

A lap-17 caution for the slowing Chad Smith changed the complexion of the race entirely. Just as fast as he streaked to the lead, Van Wormer exited the speedway with mechanical problems under the caution, handing the lead to Chamberlain.

But Chamberlain’s run at the front didn’t last long, as Carrier used a great restart to move to the point. A lap-20 caution saw Chamberlain retire from the race, moving Jason Montgomery of Jackson, Ohio, to second.

Montgomery stalked Carrier for the remainder of the race as that duo marched away from the rest of the field. Both drivers worked carefully through slower traffic, but Montgomery didn’t have enough for Carrier as he pulled away to the victory.

Notes: Carrier's Grover Motorsports-owned Rocket Chassis has a Grover Racing Engine and sponsorship from Engines Inc., Cox Wrecker Service and Blue Ridge Machinery and Tools. ... The pole-starting Van Wormer ended up 20th in the final rundown. ... Donnie Moran of Dresden, Ohio, came with thirteen-hundredths of Jackie Boggs's 10-year-old track record in posting the fastest time trials, but he had driveshaft issues early in the first heat race. ... The next series event is scheduled for May 15 at Millstream Speedway in Findlay, Ohio.