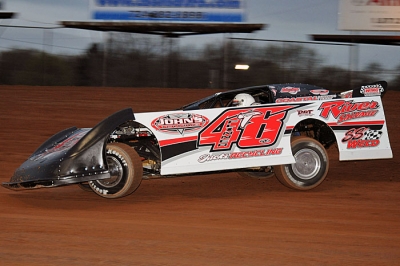 John Flinner raced to a $5,000 victory in the Showdown at Sarvertown. (Jason Shank)

Flinner quickly advanced forward from the 13th starting position, taking the lead from Boom Briggs of Bear Lake, Pa., on lap 11. Once out front, Flinner never looked back, lapping up to the second-place car in the 40-lap feature that was shortened from 50 laps because of rough track conditions.

“That was probably (the roughest) track I’ve ever run on,” the five-time Lernerville Speedway champion said in victory lane. “I was thinking when we went out that this would be a C.J. Rayburn (Chassis) type race track but with Brian Daugherty of Integra Shocks showed up at the last minute and had me do some off the wall stuff to put on the right rear, he said, I’m telling you it’ll work and it’s like who cares, I’m starting so far back, it was pretty awesome, that’s what made it.”

Briggs led until lap eleven when Flinner pulled a slide job in turn four, a move Briggs was none too happy with.

“John Flinner had the fastest car here tonight because he was able to get through the holes better than anybody,” Briggs said. “I don’t really appreciate getting run over but, that’s racing. Flinner and the No. 91 car (Beck) were just better through the rough than I was."

Once Flinner captured the lead from Briggs, Beck made his way into second and the two began to pull away from the field. Flinner mastered the rough speedway and stretched his lead over Beck to well over a straightaway.

As the laps ticked away, cars slowly headed pit side as seven cars crossed the finish line while only the top two cars finished on the lead lap.

“I was always taught to race until the race was over,” Flinner joked in victory lane. “Uncle John (car owner Johnny Johnson) would have said ‘Hammer-down, whatever it takes.”

Notes: Flinner drives a Johnny Johnson owned Rocket Chassis sponsored by John’s Towing, River Salvage and Flinner Signs and Decals. ... The victory was the first of Flinner’s career with the All Star Series. ... Lernerville hosted night one of a two-race weekend for the O'Reilly ASLMS... Action resumes Saturday night with a $4,000-to-win event at K-C Raceway in Chillicothe, Ohio.