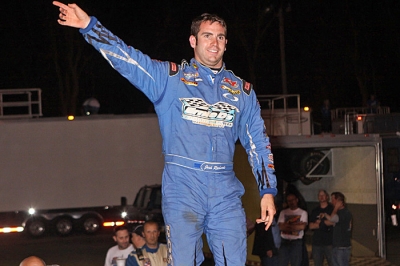 Josh Richards waves to the crowd after his $3,000 victory at Hagerstown. (pbase.com/cyberslash)

Richards, the defending and two-time World of Outlaws Late Model Series champion, started from the pole of the 35-lap race and pulled to a comfortable lead in his Ernie Davis-owned No. 25 Rocket Chassis. | Slideshow

While Richards cruised to the victory, the battle for second grew quite intense. Kyle Lear of Severna Park, Md.,held the spot the entire distance, but had to withstand constant pressure from Austin Hubbard of Seaford, Del.

Lear held on for the runner-up finish while Hubbard settled for third. Jason Covert of York Haven, Pa., advanced from the 10th-starting position to finish fourth with Dylan Yoder Selinsgrove, Pa.,advancing from 13th to finish fifth.

“I really enjoy racing here at Hagerstown, it’s always a lot of fun,” Richards said after claiming the victory. “This is one of the best tracks I’ve raced on all year so far, there wasn’t a bump on it. I just hope it was a good show for the fans.

“You just never know how big of a lead have so you have to be really careful in lapped traffic, but the cautions came when we needed them, and everything turned out good.”

Notes: Richards, who normally pilots the Rocket Chassis house car, was in his part-time ride, a Rocket owned by Ernie Davis and sponsored by Ernie D’s Enterprises. ... Bart Hartman of Zanesville, Ohio, drove a second Ernie Davis entry to an 11th-place finish. ... Jamie Lathroum of Mechanicsville, Md., ran in the top five early in the race, but faded to a seventh-place finish. ... The series returns to action May 6 with a $3,000-to-win event at Natural Bridge (Va.) Speedway.