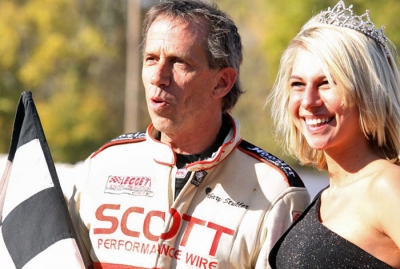 The 18th-starting Stuhler, who also previously won the season-ending event in '96, '99, and '03, overtook Tim McCreadie of Watertown, N.Y., on the 96th lap for his fifth Octoberfest victory. | Video | Slideshow

McCreadie, who went on to win the day's small-block modified feature, settled for second with Billy Decker of Unadilla, N.Y., in third. Jason Covert of York Haven, Pa., and 12th-starting Dan Stone of Thompson, Pa., rounded out the top five. Josh Richards of Shinnston, W.Va., started outside the front row and led most of the race, but he slowed with engine problems after the halfway fuel stop in the 100-lapper, handing the point to McCreadie.

“Everything worked our way,” Stuhler said. “I think if Josh had stayed in there, he definitely would have won the race. Timmy is a class act to race with and it was a lot of fun. I don’t think either one of us would have had anything for Josh if he would have stayed in there. Whatever happened to him, we’ll take it. Sometimes you get those things. It’s a good way to end the year.”

Richards jumped into the lead over polesitter Dylan Yoder at the outset with McCreadie quickly dropping Yoder to the third spot. Richards set a torrid pace in the afternoon affair, reaching lapped traffic after just 12 circuits while McCreadie, Covert and a charging Stuhler tried to keep up. McCreadie was right with Richards before the fuel stop while Covert and the others were further back.

But the halfway stop changed the race's complexion when Richards suddenly slowed and dropped to the pits. McCreadie took over as he and Stuhler began pulling away from Covert and Stone.

A lap-81 caution bunched the field and the McCreadie-Stuhler battle heated up while Decker — who started fourth but fell back as far as 12th — closed in on the frontrunning duo.

Stuhler went around the outside of McCreadie on the 96th lap, then pulled away to win by 1.38 seconds at the checkered flag.