Montgomery collects $5,000 in All Star finale 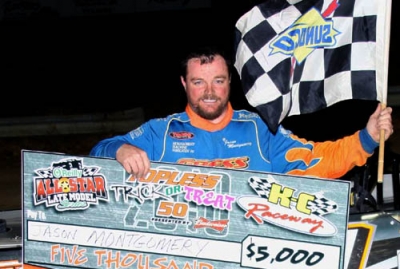 Montgomery, who started third, took the lead from seventh-starting Steve Casebolt of Richmond, Ind., on the 32nd lap and led the rest of the Topless Trick or Treat 50. Casebolt settled for second at the 3/8-mile oval while ninth-starting Jason Feger of Bloomington, Ill., rallied to finish third. Darrell Lanigan of Union, Ky., subbing for Audie McWilliams in the John Weber-owned No. 10, was fourth while fifth-row starter Steve Francis of Ashland, Ky., rounded out the top five.

Polesitter Doug Drown of Wooster, Ohio, and Rod Conley of Wheelersburg, Ohio, started on the front row with Conley out front when a lap-two caution for Greggie Oliver and Matt Lux slowed the pace.

Conley was out front for the restart, but Casebolt roaring into the lead on the seventh lap and set a torrid pace with Conley and Montgomery giving chase. Lanigan, who was scheduled to start fifth but had a flat tire during pace laps that dropped him to the tail, was working his way back toward the front.

With Casebolt still up front, Montgomery took second from Conley on the 17th lap and the race's second and final caution appeared for Drown's flat left-rear tire on the 21st lap.

Montgomery turned up the heat on Casebolt near the midpoint, then nosed ahead to take the lead on lap 32 as Casebolt slid out of the groove on the backstretch and lost ground.

Montgomery stayed in control, but Casebolt, Feger, Francis and Lanigan were all bunched in the final laps with Casebolt briefly slipping ahead to lead lap 46. After taking the white flag, Casebolt made contact with Montgomery between turns one and two, but Montgomery held on for the victory.