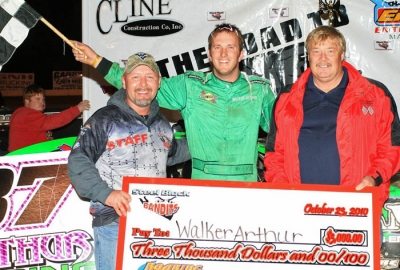 Lear led at the outset, but a turn-four miscue handed the lead to Walker. The frontrunners dueled as they entered lapped traffic, but on lap 13, Lear spun after making contact with a lapped car. He also collected third-running Matt Howsare. Lear pitted and rejoined the race at the tail.

Arthur controlled the action up front, but all eyes were on Lear, who roared to the front. He was up to third in the waning laps and took second from Singleton at the white flag. He was glued to Walker's rear bumper at the finish, but couldn't make the pass.