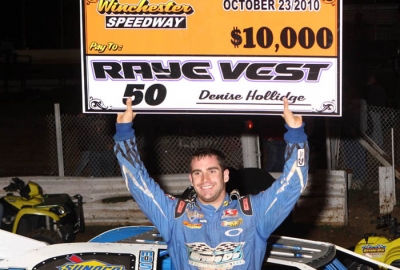 Josh Richards shows off his earnings at Winchester. (pbase.com/cyberslash)

WINCHESTER, Va. (Oct. 22-23) — Josh Richards of Shinnston, W.Va., completed a sweep of Winchester Speedway's unsanctioned fall specials with a $10,000 victory in the inaugural Raye Vest 50 at the 3/8-mile oval.

Richards, who won the Super Late Model portion of the Winchester 200 on Sept. 25, wrestled the lead from Shane Clanton of Fayetteville, Ga., on the 30th lap and led the rest of the way for the victory. Hometown driver J.T. Spence was third followed by Winchester's Tommy Armel and Jamie Lathroum of Mechanicsville, Md. Ronnie DeHaven Jr. of WInchester started outside the front row but slowed on the 12th, becoming the first retiree. | Slideshow