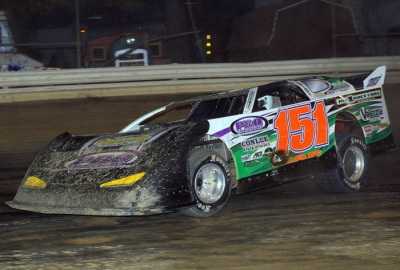 CUMBERLAND, Md. (Oct. 16-17) — Kyle Lear of Severna Park, Md., picked up the lead with eight laps to go to secure the Western Maryland Nationals title in a victory with the Cline Construction Steel Block Bandits tour on Sunday night at Allegany County Speedway. Lear matched his career high with a $5,000 victory in the Kevin Lynch Memorial. | Slideshow

In the 50-lapper, Lear worked himself into second with 12 laps to go to get behind leader D.J. Troutman. When Troutman’s engine began to sound ill, Lear closed in and grabbed the lead on lap 42. Lear beat Yoder to the finish by seven lengths at the checkers.

Lear started fourth and fell into fifth early until making up one spot after the second caution on lap nine. He was running in third headed into the mandatory fuel stop at lap 25.

Yoder was one of two drivers to move through the field throughout the race. After a multicar crash at lap three, Yoder restarted eighth and cracked the top five before lap 20. He grabbed third from Arthur with 10 to go and took second over Troutman.

Troutman had led the entire race after starting on the pole but headed to the pit area shortly after losing the lead to Lear and ended up 15th.

Notes: Lear's No. 151 1MD Race Car is sponsored by Pro Fabrications and Conlee Enterprises. ... The race was originally scheduled for Friday and Saturday, but rain pushed the schedule back a day. ... Among drivers failing to make the feature: Tommy Armel, Freddie Carpenter, Sommey Lacey, Gerald Davis, Mike Altobelli Jr., Tim Smith Jr. and Allen Brannon. ... Next up for the Steel Block Bandits is the Oct. 22-23 season finale, a $3,000-to-win event at Roaring Knob Motorsports Park in Markleysburg, Pa.