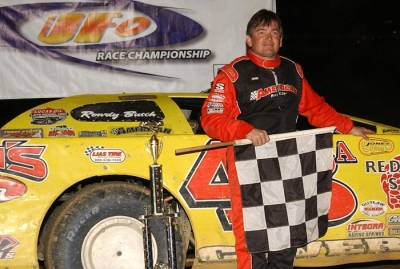 The ninth-starting Covert, of York Haven, Pa., earned $5,000 Saturday at Roaring Knob Motorsports Complex for a 55-lap victory in the UFO-sanctioned Ultimate while McClellan's 17th-place finish gave him a one-point victory for his first touring championship. | Slideshow

Covert was in a tight, lead-swapping battle with Blair, Titusville, Pa., in the second half of the race when Blair headed pitside on the 43rd lap. Covert led the rest of the way while Jeremy Miller of Gettysburg, Pa., finished second. Keith Jackson of Odenton, Md., 15th-starting Jared Miley of South Park, Pa., and 18th-starting Jamie Lathroum of Mechanicsville, Md., rounded out the top five in the series finale.

McClellan, of Stoystown, Ohio, had a subpar run, but it was good enough to clinch the series championship over Keith Barbara of South Park, Pa. Barbara led the first 14 laps but fell out of the race running third on lap 35, ending up 20th at the finish.

At the outset of the main event, Barbara took the lead from outside the front row with Jackson, Blair and Boom Briggs in pursuit. Blair took second from Jackson on the 10th lap, then snagged the lead from Barbara on lap 15 as Covert worked his way to the front.

Gregg Satterlee slowed on lap 20 to draw the first yellow, and Covert took second on the restart. When a slowing D.J. Myers drew a lap-24 caution, that set up the Blair-Covert battle that stretched the next 20 laps.

Covert led lap 31 and Blair answered on lap 32 as the frontrunners swapped the lead several times over a four-lap stretch. Blair reasserted himself on lap 34 and pulled away after a lap-35 caution. But after a lap-43 yellow for Russ King, Blair slowed just after the restart and his car was towed to the pits with apparent rear-end problems.

Covert led the rest of the away, slowed only by a caution with four laps remaining as McCellan dropped out with the title safely in hand.