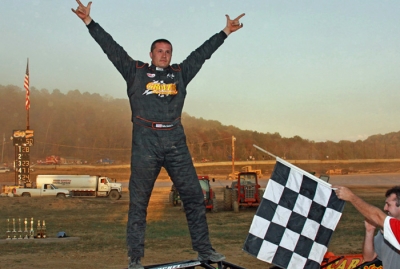 Carrier won the opening feature from his third starting spot while Conley, with the field inverted for the second 50-lapper, rallied from 18th to capture the nightcap and his first victory of 2010. | Slideshow

Carrier finished third in the second feature while Duane Chamberlain of Richmond, Ind., also posted top-three finishes in both halves of Brushcreek's richest event, which was postponed by rain the previous weekend.

In the first feature, Jacob Hawkins led three laps before he heading pitside with a puff of smoke, and Chamberlain took the lead with Carrier in pursuit. Donnie Moran took second from Carrier on the 13th lap, but Carrier regained it on a lap-16 restart.

Carrier turned up the heat on Chamberlain halfway through the race, pulling alongside on lap 30. Chamberlain inched back ahead, but Carrier rallied to make the winning pass on lap 37.

Spins by Casey Noonan (lap 41) and Devin Moran (lap 43) bunched the field two more times, but Carrier stayed in control while Chamberlain dropped to third behind Chub Frank of Bear Lake, Pa., in the final laps. Conley was fourth followed by outside front-row starter Rick Combs.

After the track surface was reworked, the second 50-lapper was set with the cars finishing the first race — 21 of 23 starters —inverted, putting Michael Paul Howard and Noonan on the front row.

Third-starting Wayne Chinn, who spun early in the first feature, swapped the with Howard early, but Donnie Moran took command on the sixth lap. But cars from deep in the field were already charging to the front with the ninth-row starting Conley and Ron Davies chasing Moran.

Conley took the lead on the 18th lap, but Moran went back ahead on a lap-25 restart while Zack Dohm dropped Conley to third.

Moran grazed the wall and flattened a right-rear tire to draw a lap-28 caution, putting Dohm on the point ahead of Conley, Davies, Chamberlain and Carrier.

But it was Dohm's turn to get into the turn-four wall on lap 32, and he slowed to draw a caution, handing the lead back to Conley. Conley stayed in control the rest of the way to take the checkers ahead of the 19th-starting Chamberlain, 21st-starting Carrier, Tim Dohm and tail-starting Jacob Hawkins.