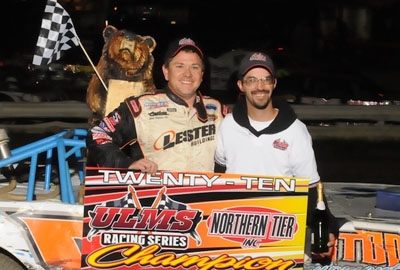 CLEARFIELD, Pa. (Oct. 3) — Boom Briggs of Bear Lake, Pa., wrapped up the championship on the Northern Tier United Late Model Series on Sunday with a Topless 30 victory at Central Pennsylvania Speedway. Briggs earned $2,500 and added the victory to a $5,000 victory the previous night at Allegany County Speedway in Cumberland, Md., his first second and third victories of the season. | Slideshow

"We’ve been struggling real bad the past few months but my guys have been working hard to get this car going fast again; most of the credit goes to them," said Briggs, adding that he'd gotten off base on suspension setups. "We went back to the basics and all the sudden we were fast again. We didn’t change the car at all, all weekend. This says a lot considering Cumberland and Clearfield are two totally different tracks."