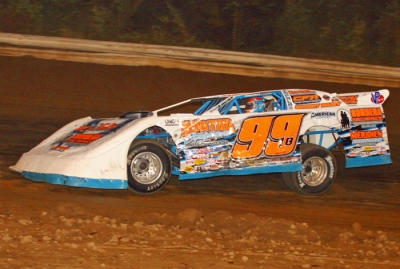 Briggs got the jump on polesitter Mike Lupfer at the outset and led Rine through the first third of the race. Traffic became a factor on lap 13, allowing Rine and third-running Ricky Elliott to closed the gap under a second.

But yellow flags on consecutive laps didn’t faze Briggs. Rine gave up second to Elliott on lap 28 after a double-file restart only to reclaim it on the last restart one lap later. The top five eventually settled down to Briggs, Rine, Yoder, Elliott and Troutman. Briggs took the checkers three seconds ahead of Rine.

UFO points leader Keith Barbara of South Park, Pa., finished 14th and took the points lead from Chad McClellan, who started with a provisional. Barbara has a three-point lead heading into the final series weekend.