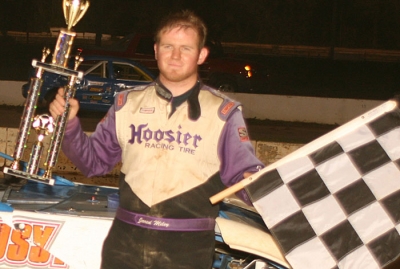 Miley, who started fifth, ran a steady third before a third caution on consecutive laps allowed him to drive past Jeff Rine of Danville, Pa.

D. J. Troutman of Hyndman, Pa., led the first 18 laps before the race heated up when a caution came on lap 19. Troutman, who was challenged by Jack Pencil of Bedford, Pa., on the restart, survived the first wave of restarts and Pencil became the next caution with a broken left front.

Jeff Rine, who inherited second with Pencil out, wrestled the lead from Troutman in turn three on lap 21. Miley dropped Troutman to third.

Rine’s time out front was brief. Another caution gave Miley an opportunity and he grabbed the lead over Rine by lap 22. Rine lost second to Gary Stuhler of Greencastle, Pa., one lap later.

Miley took the checkers a second ahead of Stuhler while 18th-starting Ricky Elliott of Seaford, Del., a former Big Kahuna weekend winner, rallied for third. Rine and Gregg Satterlee of Rochester Mills, Pa., rounded out the top five.