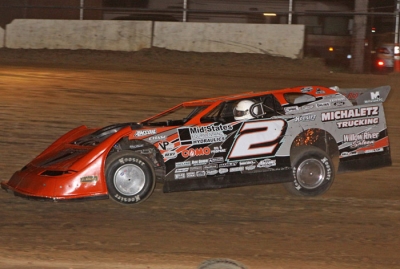 EAST SMETHPORT, Pa. (Sept. 25) — Dominating the race and lapping more than half the field, polesitter Brady Smith of Solon Springs, Wis., made his 16-hour journey worth it at McKean County Raceway with a $13,000 victory in the fifth annual Priority Care RaceFan 50. | Slideshow

Smith led from the pole in racing to victory in his first visit to McKean County and his first-ever event with the Northern Tier United Late Model Series.

At the outset, Smith and Satterlee led the 25-car field to the green flag, but Brent Rhebergen's disabled car triggered a turn-one pileup that eliminated Matt Lux and Russ King, last year's winner. Billy Decker, Dave Lyon and Bump Hedman were among others involved, but they were able to continue.

Smith took control on the second start with Satterlee, Stone, Hess and Chris Hackett in pursuit. Smith edged away, building a straightaway lead after 10 laps while Satterlee and Stone battled for second.

Smith was lapping slower cars and had a commanding lead at the halfway point while Wight worked his way toward the top five.

Smith continued his lapping safari — putting ULMS points leader Boom Briggs a lap down along with Chad Valone, David Scott and other regional standouts — while Stone wrestled the second spot from Satterlee on lap 35. Wight continued his progress, taking spots from Hess and Satterlee to move into third.

At the double checkered flags, Smith cruised to the finish far ahead of Stone with a cushion of six lapped cars between them.