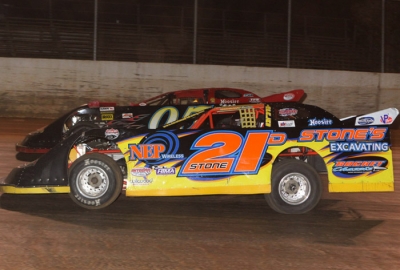 HAGERSTOWN, Md. (Sept. 11) — At the right place at the right time, Dan Stone of Thompson, Pa., took over with six laps remaining to capture the season finale on the Three State Flyers circuit Saturday at Hagerstown Speedway. Stone earned $3,000 for his first Hagerstown victory, his first series victory and the 100th victory of his career. | Slideshow

Stone, who took the checkers two seconds ahead of series champion Jason Covert of York Haven, Pa., inherited the lead when Roy Deese Jr. of Odenton, Md., broke an axle.

Starting third, Stone squeezed into second ahead of the polesitting Covert as Deese took the lead from outside the front row. Stone put pressure on Deese nearly every lap and was no further back than a length most of the 35-lapper, and it paid off when the leader fell out. Covert couldn't keep up over the final six laps.

“We’ve been trying to win here for a long time,” Stone said. “I’ll tell you what. We’ve lost a lot of races like Roy just did. I think he had a better car there at the end we just hung in there and our car lasted. So I guess we’ll take it any way we can get it.

"This is great. We’ve been trying to win one of these Three State Flyers races and this actually is my 100th career win. It’s pretty awesome to do it here.”

Deese, Stone and Covert were the frontrunners early in the race, although Alan Sagi's lap-12 pass of Covert was negated by a caution when Bryan Bernheisel spun.

Deese opened a little breathing room on Stone following the lap-12 restart as Covert kept Sagi at a distance. Deese stayed in control until his mechanical woes forced him out and opened the door for Stone.

“I knew I just had to keep it straight,” Stone said. “I knew as long as I didn’t screw up too bad, he (Covert) was going to have to be really good to get by me.”

Sagi and Marvin Winters were next followed by Kyle Lear, who came from 11th to finish fifth.

In a special 20-lap event for the top drivers in Three State Flyers points, Scott LeBarron of Dover, Pa., topped a 12-car field to earn $2,000. Ronnie DeHaven Jr. of Winchester, Va., led early but fell out when he lost a distributor cap. Covert, J.T. Spence, D.J. Myers and Sagi chased LeBarron to the checkers.