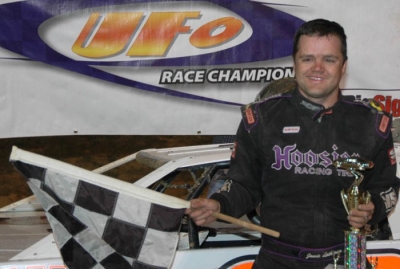 MARKLEYSBURG, Pa. (Sept. 11) — Jamie Lathroum of Mechanicsville, Md., overtook Doug Horton of Bruceton Mills, W.Va., on a lap-14 restart and led the rest of the way for a UFO Race Championship Series victory at Roaring Knob Motorsports Complex. The ninth-starting Lathroum pocketed $5,000 for capturing the 13th annual King of the Knob, his career first series victory and first-ever victory at the track. | Slideshow

Jared Miley of South Park, Pa., who started with Lathroum on the fifth row, was second followed by 11th-starting Jeremy Miller of Gettysburg, Pa. Doug Dodd of Cambridge, Ohio, rallied from 21st to finish fourth and and 13th-starting Jared Hawkins of Fairmont, W.Va., rounded out the top five in the 51-lap feature.

Chuck Clise led the 25-car field to the green flag and led eight laps before Horton fought past and began to pull away. When a lap-14 caution flew for a tangle between Clise and Matt Gaston, Lathroum took command on the restart while Horton slipped back four spots and spun in turn three.

Lathroum, Miley and Miller were the top three the rest of the way with Lathroum slicing through lapped traffic to maintain his edge.

With six laps remaining, smoke wafted from the rear of Lathroum's car, and his pursuers smelled blood. But the leader never faltered and completed his victory.