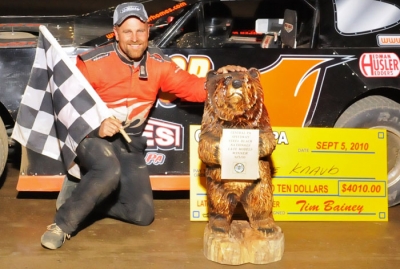 CLEARFIELD, Pa. (Sept. 5) — Gene Knaub of Dover, Pa., made his first visit to Central Pennsylvania Speedway a good one as he picked up a victory in the Shawn “Sheetz” McGarvey Steel Block Late Models Nationals. Knaub earned $4,010 for the unsanctioned triumph. | Slideshow

With the missing man formation at the front of the field to honor McGarvey and with his daughter, Kelli on the flagstand as the honorary starter, 24 Late Models took the green flag.

Tim Fedder took the lead at the start with Knaub second and Kennedy third. As Fedder continued to set the pace, Knaub was all over his bumper, trying high and low multiple times as the frontrunners began to work the slower traffic. Knaub finally made the pass on the outside, taking the lead exiting turn two.

The first caution flew on lap 25 with Duane Brooks going up in smoke as the engine let go. On the restart, Knaub continued to lead but Fedder spun in turn two, putting him on the back of the field and moving Kennedy to second ahead of Smith.

Smith overtook Kennedy on the restart and couldn't catch Knaub, who took the double checkered flags as flagger Mike Frisco brought the race to an end.

Notes: Knaub's Rocket Chassis is sponsored by Superior Homes and 382 Auto. ... The three-division program drew 91 race cars. ... Third-place finisher Chuck Kennedy was racing with a heavy heart after the death of his father the previoius week. ... Dan Henry of Luthersburg, Pa., started the night by hitting the first-turn wall and flipping off the track; he wasn't injured. ... The race honored McGarvey, whowas killed in an April 2009 logging accident; McGarvey's last victory came in the '08 Steel Block Nationals. ... Among drivers failing to make the feature lineup: Tony Musolino, Bernie Whiteford and John Chesnalavich. ... Central Pennsylvania hosts a $2,000-to-win event for topless Late Models on Oct. 3.