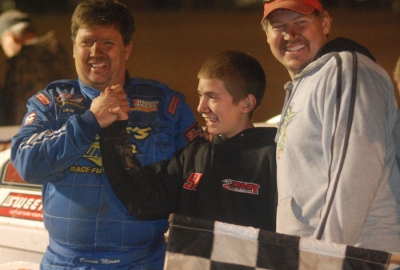 Moran and Birkhofer earned $20,000 apiece for 50-lap victories while Davenport, capitalizing on a wild late-race tussle between frontrunners Devin Friese and Jimmy Mars, collected $10,000 in a winner-take-all, 25-lap finale among the top eight finishers in the first two unsanctioned features.

A healthy crowd enjoyed a cool evening and a Super Late Model-only racing program that lasted into the wee hours at Tyler County, which drew 78 race teams to the highlight of a three-night Labor Day weekend event.

Birkhofer, who earned $10,000 on Friday in a UFO Race Championship Series tuneup feature at Tyler County, praised the racing surface that allowed winners to race to front — Moran from sixth, Birkhofer from fifth and Davenport from 10th.

"It was a little different animal tonight with the rubber, but it was still racy," Birkhofer said in victory lane. "It's just an amazing place to be able to race, because other places it will get like a freight train, but this place here man, it's fun."

The 78 entries were split to compete in separate, complete racing programs highlighted by 50-lap features, while the Sweet 16 Shootout that capped the night gave the last-row starting Moran and Birkhofer a chance at a $20,000 bonus; neither got into serious contention in the 25-lap sprint.

Moran, the Hall of Fame driver and four-time World 100 winner from Dresden, Ohio, earned his richest victory since 2005, when he captured the Lucas Oil Series-sanctioned Pittsburgher at Pittsburgh's Pennsylvania Motor Speedway.

"It's been a long time since I've won a big race. Thanks to my wife and all my family sticking with me on this. It's pretty cool," said the 47-year-old Moran, who entered Tyler County action along with 15-year-old son Devin. "My son's made me work harder on my deal. He's going to beat me to quick, or I've gotta get out of the seat — so I did something."

Moran took the lead from polesitter Butch McGill of West Union, W.Va., on the 15th lap and wasn't challenged the rest of the way in his MasterSbilt Race Car carrying the familiar No. 99.

Bub McCool of Vicksburg, Miss., rallied from his 12th starting spot to finish second while Davenport, of Blairsville, Ga., came from the ninth row to finish third. Robbie Scott of Shinnston, W.Va., who started 15th, was fourth with surprising Stephen Evans of Tyner, N.C., rounding out the top five.

Cody Parker, 19, of Zanesville, Ohio led the first seven laps from outside the front row, but McGill went ahead on a restart after Mars and Jared Miley tangled in turn four.

But McGill soon had his hands full with Moran, who won a side-by-side duel to go ahead for good on lap 15.

Ninth-starting Chris Madden of Gray Court, S.C., reached second on lap 23 and tried to keep pace with Moran, but his chances ended when contact with McCool on the backstretch on lap 33 sent his No. 44 spinning into the infield. The drivers animatedly discussed their views of the contact during the caution period, but Madden had to restart on the tail while McCool held second the rest of the way.

Birkhofer, of Muscatine, Iowa, was dominant in Friday's victory, and it didn't take him long to reassert himself on Saturday. The fifth-starting driver was up to second by the sixth lap and hounding polesitter Jeep Van Wormer of Pinconning, Mich., when a lap-10 caution waved for Corey Conley.

When Van Wormer chose the inside for the double-file restart, Birkhofer used the outside groove to sweep into the lead and quickly pulled away. Only minor cautions on laps 28, 40 and 42 slowed Birkhofer the rest of the way as he used virtually the same setup as the previous night.

"The car's pretty much identical," the 38-year-old driver said. "It's got two clicks of rebound different in the front and different tires ... man, that thing, I can't believe how good it steers. I (found something) before last weekend, and man I'm really looking forward to getting behind the wheel all the time now. It's a lot of fun."

Third-starting Will Vaught of Crane, Mo., took second from Van Wormer on a late restart to finish second while ninth-starting Matt Miller of Waterville, Ohio, and Mike Benedum of Bristol, W.Va., rounded out the top five. Outside front-row starter Kyle Bates of Kimbolton, Ohio, fell out of the top five early and ended up 15th.

The crowd was buzzing about the Friese-Mars fireworks in the Sweet 16 Shootout that capped the unique racing program, but Davenport was glad to reach victory lane after being among the night's fastest qualifiers but failing to rebound from a five-car heat race inversion.

In the finale, Davenport lined up 10th and was running third when the race appeared all but over with Friese leading Mars down the backstretch for a final time. But a last-lap caution appeared for a pair of slowing cars and the clash among frontrunners on a green-white-checkered restart opened the door for Davenport, who cruised the last lap and a half.

"We're just lucky we caught that last caution at the right time, but I still think we had the fastest car — and that's who should've won," Davenport said.

Jamie Lathroum of Mechanicsville, Md., rebounded from a lap-11 spin — while battling Robbie Scott for the second spot down the backstretch — to finish second while Mars, Friese and Scott rounded out the top five.

Friese started outside the front row and checked through most of the race, but the fifth-starting Mars reeled him in late and hounded him the last several laps. Mars worked the low groove but couldn't quite find enough to get past Friese, but when the final caution set up a double-file restart and two-lap shootout, Friese chose the inside groove and Mars gave it a whirl on the outside.

The two ran tightly into turns one and two, then both lost ground when they made contact exiting turn two as Davenoport roared past. They made more contact the rest of the way with Mars nearly getting sideways heading for the white flag, then spent the cool-down lap gesturing their displeasure at one another.

Friese took his share of the blame, saying he purposely hit Mars exiting turn two in retaliation for contact from Mars as they worked the corners.

"We can't be taking each other out, though," Friese said. "Rubbing and banging — that's one thing — but when you start trying to wreck people, then that's another story. And I'm as guilty of it as he is, but that's the way it is."

Mars denied making contact in turn one, blaming Friese for the accident.

Notes: Moran's MasterSbilt Race Car is powered by a Malcuit Engine and sponsored by Eddie's Sunoco, Custom Cutters, C&J Excavating and Muskingum County Speedway. ... Birkhofer's MB Customs machine has a Pro Power engine and sponsorship from ASI Racewear, Hilton Head National and Zens Flooring. ... Davenport's Barry Wright Race Car has a Clements powerplant and sponsorship from Mega Plumbing, Elite Concrete and En Compass. ... The dual-race format used group qualifying and a five-car heat race inversion. The fastest qualifiers in the groups were Chris Madden, Davenport, Donald Bradsher, Robbie Scott, Devin Moran, Corey Conley, Doug Dodd and Zack Dohm; Davenport, Conley and Dohm had to run consolation races. ...Devin Moran broke a rear-end in his car during his feature. ... Tim Dohm, Zack's father, was dominating the sixth heat when he got into the backstretch wall; he iced his right wrist that was injured in the accident but didn't plan to seek medical attention. ... Devin Friese was caught up in a consolation race accident but received a provisional starting spot for the feature based on his finish in Friday's action. ... No serious accidents slowed any of the features. ... The event drew a bigger crowd than Friday's action, but the grandstands — and camping areas at the Tyler County Fairgrounds — weren't as full as previous Labor Day weekend crowds, when the track hosted the Hillbilly 100. That Lucas Oil-sanctioned event moved an hour away to West Virginia Motor Speedway in Mineral Wells, W.Va., where its scheduled for Sunday.