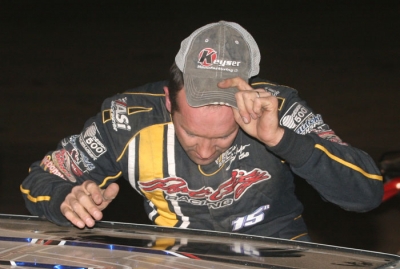 MIDDLEBOURNE, W.Va. (Sept. 3) — Dirt Late Model racers with big leads often play it conservative to avoid making mistakes. In his debut at Tyler County Speedway on Friday, Brian Birkhofer wasn't playing it conservative. Then again, the 38-year-old driver from Muscatine, Iowa, didn't realize he had a half-track lead in the late stages of the 51-lap feature. | Video | Slideshow | Friday notebook

"I didn't know we had that dominant of a car," Birkhofer said. "The car just drove so dang good, if I slowed down, I was afraid I'd push, so I just was trying to attack lapped traffic."

Birkhofer's attack resulted in a flag-to-flag victory in the opening race of the Black Diamond weekend at the quarter-mile oval in West Virginia as he pocketed $10,000 for his first victory on the Pennsylvania-based UFO Race Championship Series.

"It's just good to actually win again. It's been a long time," said Birkhofer, who has three main event victories this season but none since mid-June. "I'd get to them (lapped cars) and my car was so positive, man, when you're that good, it's just fun to race. It's been a while since I've had that a lot of fun racing."

Fourth-starting Steve Shaver of Vienna, W.Va., made a few mild challenges on restarts, but Birkhofer, who started outside the front row, cruised after a flurry of six cautions between laps 14-19 kept the 24-car field bunched.

Birkhofer cruised the rest of the way, lapping all but four competitors in completing the domination of the first race of the lucrative weekend at Tyler County. Hall of Famer Rick Aukland of Zanesville, Ohio, restarted sixth after the final mid-race caution, but by the time he reached the second spot with about 10 laps remaining, he was a half-track behind the leader.

"Birky was awful good. I couldn't even see him when I got to second. There wasn't much sense in trying to run over a lapped car to get to him. I couldn't even find him. He must've been real good."

Chris Madden of Gray Court, S.C., finished third, one spot ahead of 14th-starting Jamie Lathroum of Mechanicsville, Md., who ran as high as third. Dave Hess Jr. of Waterford, Pa., rounded out the top five.

Polesitter Jonathan Davenport of Blairsville, Ga., slipped back to third early — the outside lane was the preferred starting spot — and was battling Madden for that spot when he spun on a lap-17 restart. Jimmy Mars of Menomonie, Wis., crept from eighth to fourth early in the race before slowing and heading to the pits.

Birkhofer, meanwhile, had no trouble and enjoyed his first visit to the action-packed West Virginia bullring.

"Thanks to all the great fans for taking all that dust up there, but man I tell you, it's sure fun racing out here," Birkhofer said in victory lane. "You come out here and look at it and it looks kind of small, but you get out here and drive it, it drives big. It drives like a circle. I grew up in Iowa on those big half-miles. They say you counter-steer a lot here. Well, I didn't have to counter-steer a whole lot, but tomorrow night might be a different situation."

Friday's feature was just the beginning of three nights of Labor Day weekend action at Tyler County, highlighted by a pair of $20,000-to-win unsanctioned Late Model features on Saturday night.

Notes: Birkhofer's MB Customs chassis has a Pro Power engine and sponsorship from Hilton Head National, Zens Flooring and J&J Steel. ... The feature started about 12:30 a.m. and wrapped up just past 1 a.m. ... While the pits were packed with 210 race cars (including 70 Super Late Models), the grandstands and campgrounds weren't as full as recent years on Labor Day weekend, when the track (then under BDS Promotions) hosted the Hillbilly 100. ... But the fans on hand did enjoy pleasant, cool weather to kick off a weekend with more cool weather on the horizon. ... In UFO's pill draw format, only the top two finishers from each of eight heats and the top two finishers from each of three consolations made the main event. ... In the third heat, Rick Williams made a three-wide pass on the outside against front-row starters Birkhofer and Wayne Maffett Jr., but Birkhofer tracked him down to lead the last five laps; suspension problems sidelined Williams early in the main event. .... Dave Hess Jr. won a side-by-side duel with D.J. Cline early in the eighth heat and pulled away for the victory. ... Rick Aukland narrowly edged Jared Hawkins with a last-lap pass for a transfer spot in the fourth heat, but Hawkins got a provisional starting spot. ... Steve Weigle was checked out by medical personnel after his No. 75 was heavily damaged in a turn-one accident in the third consolation race; he wasn't injured. ... Among drivers failing to make the feature: Kenny Compton Jr., Jacob Hawkins, Zack Dohm, Chris Garnes, Wayne Maffett Jr., Ken Schrader, Chuck Harper, Jason Dupont, Dillan White, John Henderson, Mark Banal, Corey Conley, Darryl Hills, Vic Coffey, Steve Wilmoth, Jeff Burdette, Donald Bradsher and Matt Miller. ... Next up for UFO competitors is the $5,000-to-win King of the Knob on Sept. 11 at Roaring Knob Motorsports Complex.