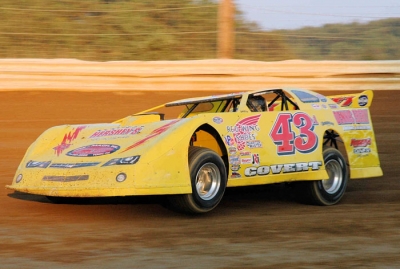 MARKLEYSBURG, Pa. (Aug. 29) — Polesitter Jason Covert of York Haven, Pa., stayed in control all 35 laps Sunday at Roaring Knob Motorsports Complex to capture his fifth race of the season on the Three State Flyers tour for Super Late Models. Covert held off steady pressure from Chad McClellan of Stoystown, Pa., most of the way en route to his $3,000 payday.

D.J. Myers of Greencastle, Pa., rallied from his 10th starting spot to finish second while Devin Friese of Chambersburg, Pa., was third. Scott LeBarron of Dover, Pa., and Mel Minnick Jr. of Uniontown, Pa., rounded out the top five finishers in the first-ever series event at the 3/8-mile oval.

Covert went to the front at the outset with McClellan giving chase. Ron Delano Jr. closed to make it a three-car battle as the frontrunners reached lapped traffic, but a lap-14 caution gave Covert clear racetrack.

McClellan stayed with Covert on the restart and into the race's late stages, but Delano lost the third spot when he hooked the cushion and hit the wall on lap 34, setting up a two-lap shootout.

McClellan's demise came on the restart when he jumped the cushion and spun after mechanical failure, dropping him to 14th in the final rundown.

Myers took up the chase the final two laps, but Covert held on for his third career victory at Roaring Knob.