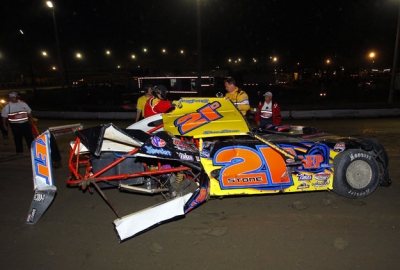 GRANBY, Quebec (Aug. 11) — Third-starting Tim Fuller of Watertown, N.Y., took the lead from Robbie Blair of Titusville, Pa., on the sixth lap and led the rest of the way in O'Reilly All Star Late Model Series action at Autodrome Granby. Fuller earned $5,000 for the 50-lap victory, taking the checkers ahead of Pennsylvanian's Jared Miley of South Park and Max Blair of Centerville. | Slideshow

Miley survived a lap-12 tangle involving Charlie Sandercock and Fred Carleton for his second-place finish, but Robbie Blair wasn't around after dropping out on the 31st lap after getting into the inside wall following a parts failure.

Fast qualifier Dan Stone of Thompson, Pa., also was among the retirees, but his departure was the toughest of all when his No. 21D rolled several times in the second corner on the 17th lap after a rear axle broke. Stone, who was sore but otherwise uninjured, was coming off a two-victory weekend, including a $3,000 payday at Selinsgrove (Pa.) Speedway.

Notes: Fuller's John Wight-owned Rocket Chassis is powered by an LJL Kevlar powerplant and sponsored by Gypsum Express. ... Dan Stone's lap of 18.254 seconds lowered the track record. ... Fuller went on to sweep the Canadian trip with a victory Thursday at Brockville (Ontario) Speedway.