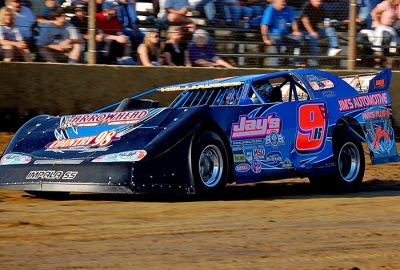 Hess settled for second while Knight, of Ripley, N.Y., finished third in the ULMS main event. Dick Barton of Ashville, N.Y., and John Volpe of Lakewood, N.Y., rounded out the top five. Polesitter Chad Valone of Warren, Pa., stopped at the pit entrance midway through the feature to draw a yellow and ended up 28th in the 31-car field.

Outside front-row starter David Scott of Garland, Pa., led from the outset, but Hess took the point on the 12th lap, just before Dennis Lunger slowed to draw a caution.

Blair moved up to challenge Hess on the restart, and Blair edged ahead to lead the 22nd lap. Hess fought back among heavy traffic to go back out front, and Valone's caution halted the race on lap 25.

Hess, Blair, Scott, Barton and Knight made up at the top five at halfway, and Blair went to work on Hess again. Blair took over for good on the 29th lap as Hess began to fade.

Blair was pulling away before the final caution for a slowing Ron Davies on lap 41, but Blair faced no challenges the rest of the way in stretching his winning margin in the final laps.

Notes: The winning Rocket Chassis driven by Blair is sponsored by Jay’s Auto Wrecking, Arrowhead Wine Cellars, WXTA Country 98 and Key Pointe Realty. ... Roberts Trucking and Seamens Auto Wrecking sponsored the night's racing. ... Blair has five career ULMS victories. ... Winning car owner Mike Knight won the previous ULMS event at Stateline on July 10. ... The most serious caution appeared midway through the race when John Lobb and Scott Johnson tangled, sending both cars spinning into the infield in the middle of the frontstretch. Lobb pulled into the pits and Johnson required a wrecker to leave the speedway. ... Next up for ULMS competitors is an Aug. 14 event at Woodhull (N.Y.) Speedway.