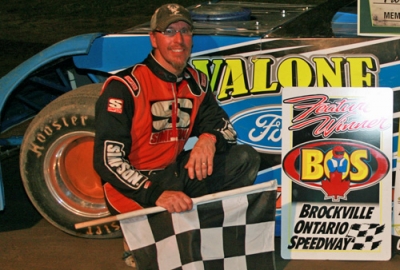 BROCKVILLE, Ontario (July 24) — Polesitter David Scott of Garland, Pa., took the lead from fellow front-row starter Andrew Reaume of Blenheim, Ontario, midway through the 30-lap feature Saturday at Brockville Speedway and led the rest of the way. Scott earned $2,000 for a victory on the season-opening event on the Ontario Dirt Late Models circuit.

Reaume jumped into command at the outset, but once Scott cleared him, he cruised the rest of the way while Reaume settled for second. Reigning ODLM champion Greg Oakes of Franklinville, N.Y., finished third followed by Chad Valone of Warren, Pa., and Peter Mantha Jr. of Gatineau, Quebec, who rallied from his 13th starting spot.

The most serious accident was a multicar crash in turn one early in the race that damaged the cars of Jason Haskell, Greg Belyea, Adam West, Charlie Sandercock and Keith Cameron.

The scheduled series opener at Autodrome Edelweiss was rained out July 23 and won’t be made up.