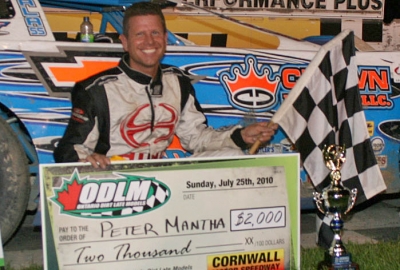 CORNWALL, Ontario (July 25) — Peter Mantha Jr. of Gatineau, Quebec, took the lead amid traffic late in the 35-lap feature at Cornwall Motor Speedway on Sunday and raced to his first career Late Model victory. The fifth-starting Mantha, who drives a Chub-Frank prepared car that’s a lookalike to the World of Outlaws driver’s machine, earned $2,000 on the Ontario Dirt Late Models circuit.

Midway through the race, it appeared Chad Valone of Warren, Pa., Oakes and Scott would settle the results among themselves. But Valone got too high in turn four and lost control on lap 23, drawing a yellow flag and handing the lead to Oakes.

Oakes and Scott then battled it out up front, swapping the lead through slower cars as Mantha chased them in third. Mantha stalked the frontrunners and worked his way to the front, leading the final laps for the victory.

Several cautions slowed the action, the most serious for a lap-three yellow after a tangle on the frontstretch that included 14 of 25 starters.