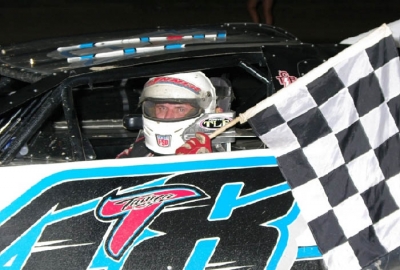 The 28-lapper was scheduled to be the first of two twin features sanctioned by the UFO Race Championship Series and Northern Tier United Late Model Series, but rain postponed the nightcap. A makeup date is expected to be announced later this week.

Baker settled for second at the half-mile oval with hometown driver Mike Johnson rallying from his 11th starting spot to finish third. Alex Ferree of Saxonburg, Pa., recovered from getting caught up in an early caution to finish fourth, advancing six positions the final two laps. Polesitter Jim Stephans of Pittsburgh rounded out the top five.

Outside front-row starter Jared Miley of South Park, Pa., took the lead from the outset in a race slowed when UFO points leader Chad McClelland of Stoystown, Pa., slowed with a flat tire on the second lap. Action was slowed again on the restart when Mark Banal spun in turn four, triggering a scramble behind him that involved Ferree, John Mollick and Dave Wade, who became the race’s first retiree.

Miley went back to work, but his race didn’t last much longer after his throttle hung and he crashed into the turn-one wall on the fifth lap, handing the lead to Baker with Flinner in pursuit.

Baker led the next five laps, but Flinner’s fleet No. 48 swept past into turn three on the 11th lap, and he led the rest of the way.

Baker got a final shot at Flinner with a two-lap dash to the finish after sixth-running Lynn Geisler tagged the turn-two wall to draw the final caution, but Flinner edged away for the victory.