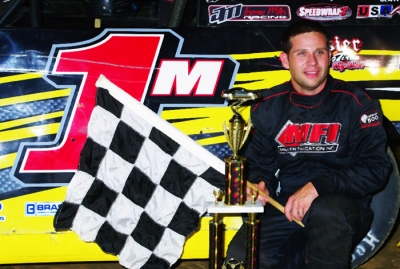 Jamie Lathroum of Mechanicsville, Md., dropped Myers to second on the 11th lap and was the runner-up in the Supernational Road 40. Jared Miley of South Park, Pa., was third while Jared Hawkins of Fairmont, W.Va., rallied from 16th to finish fourth. Keith Jackson of Odenton, Md., rounded out the top five. Polesitter Keith Barbara of South Park was seventh.

Myers ended up 15th while series points leader Chad McClellan of Stoystown, Pa., was 13th in a borrowed car.

Lathroum and Miley closed in on Miller in the closing laps, but he held on for the victory, four lengths ahead at the checkered flag.