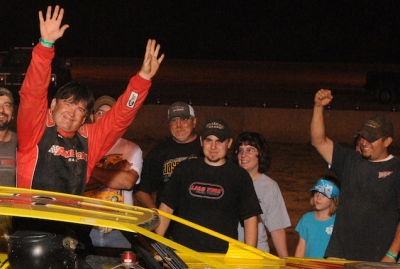 Lathroum, who started outside the front row, settled for a second-place finish while Jeremy Miller of Gettysburg, Pa., came from the sixth row to finish third. Series points leader Chad McClellan of Stoyston, Pa., and Jared Miley of South Park, Pa., who recovered from an early spin, rounded out the top five.

Covert was up to third after 17 laps, but he fell back to fourth at halfway as Lathroum was pulling away in the 44-lapper ahead of Clate Copeman, McClellan, Covert and Miller. McClelland regained second from Copeman on lap 26, but Covert muscled past McClelland into second on a lap-29 restart, and Miller dropped McClellan to fourth.

Keith Barbara of South Park slowed on lap 41 to set up a three-lap dash to the checkers, and John Mollick’s spin on the restart reset the field once again with Lathroum to the inside of a double-file restart with Covert.

Covert stayed with Lathroum down the frontstretch and came out ahead exiting turn two for a lead he’d never give up.