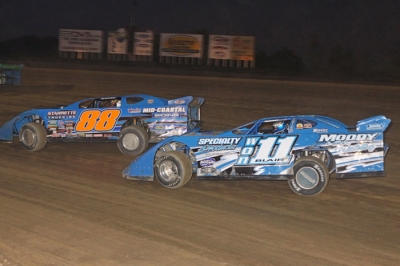 CLEARFIELD, Pa. (July 3) — Series points leader Robbie Blair of Titusville, Pa., completed a Fourth of July weekend sweep of O’Reilly All Star Series action at Central Pennsylvania on Saturday by leading the final 13 laps of the Yankee Doodle 50. Blair’s $7,000 victory gave him a weekend total of $10,000 as he won his fourth race in four 2010 stars at the Clearfield oval. | Slideshow

Blair worked his way masterfully through lapped traffic during a 38-lap green flag run to overtake polesitter Mike Knight of Ripley, N.Ny, and check out for his fourth series victory of the season. Jared Miley of South Park, Pa., finished second followed by Jeremy Miller of Gettysburg, Pa., Ricky Elliott of Seaford, Del., and 12th-starting Dave Hess Jr. of Waterford, Pa. Knight spun on the 38th lap trying to regain the lead from Blair and ended up 24th in the 25-car field.

Knight and Elliott started on the front row with Knight setting a blistering pace, entering lapped traffic after just eight circuits. The third-starting Blair chased the front-row starters, taking second from Elliott on the 17th lap and setting his sights on Knight.

With lapped traffic slowing Knight’s progress, Blair made up ground, catching the leader on lap 33. Knight had trouble lapping Boom Briggs, and Blair made an outside move to get around Knight and take command.

Knight went into turn three trying to regain the lead, but his No. 9k got into the infield berm and he made contact with Briggs, spinning at the turn-four exit to draw the first of two cautions. Blair cruised the rest of the way, delayed only by a lap-46 yellow to extend his series lead over Briggs to 64 points.

Notes: Blair’s Draime-powered Rocket Chassis is sponsored by Specialty Products, Bossard’s Auto, EquiCross and Maloney Tool & Mold. ... The feature lasted 29 minutes. ... Next up for the O’Reilly All Stars is a $4,000-to-win event at Mercer (Pa.) Raceway Park on July 10.