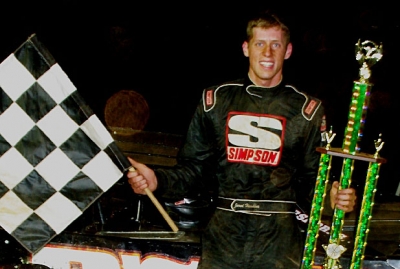 MIDDLEBOURNE, W.Va. (July 3) — Eighth-starting Jared Hawkins of Fairmont, W.Va., took the lead from his younger brother Jacob on the 20th lap, then led the rest of the way in the 51-lap Earl Hill Championship at Tyler County Speedway for a $5,000 victory on the UFO Race Championship Series. | Slideshow

Hawkins battled 12th-starting Robbie Scott of Shinnston, W.Va., on a lap-47 restart to secure his first series victory. Scott settled for second with Keith Barbara of South Park, Pa., third. Paul Wilmoth Jr., who started outside the front row and led the first eight laps, was fourth and Chad McClellan of Stoystown, Pa., advanced 13 positions for fifth and the series points lead.

Jacob Hawkins, who started fifth and led laps 9-19, ended up sixth at the finish.

Notes: Chad McClellan and John Mollick were tied in UFO points entering the event. ... McClellan got the Bernheisel Race Components and Lazer Chassis hard charger honors. ... Mollick spun in his heat and his crew thrashed to repair damage to the rear of his car; he was 10th in the main event. ... McClellan, who regularly runs Ford powerplants, had to borrow a Chevy for the Tyler County race. A broken air cleaner stud required repairs before the main event. ... The next UFO event is July 11 at Dog Hollow Speedway in Strongstown, Pa., for a $5,000-to-win event.