Blair muscles past Miley for victory at Clearfield 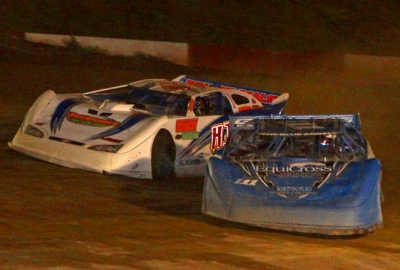 CLEARFIELD, Pa. (July 2) — Robbie Blair of Titusville, Pa., muscled past Jared Miley of South Park, Pa., on a late-race restart at Central Pennsylvania Speedway on Friday to win the Let Freedom Ring 25. The ninth-starting Blair earned $3,000 for his series-leading third O’Reilly All Stars victory of 2010. | Slideshow

"It just didn’t seem like Jared would fire on restarts,” Blair said. “It looked like he was hitting a slick spot in turn four where we were starting, and whoever was behind him had a bit more traction. My car took off on restarts and on that last one, I was able to get underneath him going into one.”

Miley took control from the outset over fellow front-row starter Mike Knight of Ripley, N.Y., edging away before a pair of lap-nine cautions, first for Gregg Satterlee and then for Darren Peters.

Miley faced pressured from Knight and John Britsky on the restart while Briggs and Blair worked toward the front. Britsky’s chances ended with a lap-15 flat tire, and Knight also had to make a brief pit stop because of a loose distributor cap.

With Miley still setting the pace, Blair took third from Myers on the 16th lap, then took second from Lux before cautions on lap 19 and 22 set up a three-lap dash to the finish.

On the final restart, Blair worked under Miley down the frontstretch and the frontrunners made contact with Miley sliding up the racetrack, falling out of the top 10. Blair led the final two laps for the victory.