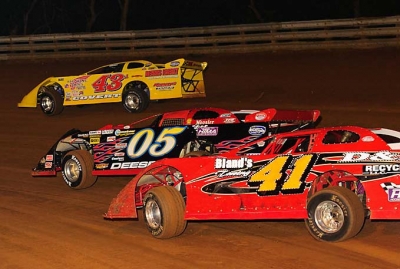 HAGERSTOWN, Md. (June 25) — Jason Covert of York Haven, Pa., got back on the winning track at Hagerstown Speedway, capturing his fifth career start on the Three State Flyers circuit at the half-mile oval after suffering his only loss earlier this season. Covert led all the way in the third annual Red Nininger Memorial to earn $3,000.

“We have to thank the Niningers for everything they’ve done in racing — Glenn, his dad and everybody,” said Covert, who started outside the front row and beat fifth-starting Brian Booze of Marion, Pa., to the checkered flag by 1.677 seconds. “It’s an honor to win it twice and have those trophies. That means a lot especially after coming to Hagerstown all those years. I appreciate them having it every year.”

Booze, who took the second spot from polesitter Roy Deese Jr. of Odenton, Md., on the second lap, was the runner-up ahead of Deese with Gary Stuhler of Greencastle, Pa., and Jeremy Miller of Gettysburg, Pa., rounding out the top five. Minor cautions slowed the action on laps nine and 23.

Booze drew closer to Covert in the final laps, but the leader was on cruise control. “When you get out in the lead like that, the guys were telling me, there was no reason to run the tires off the car,” Covert said.