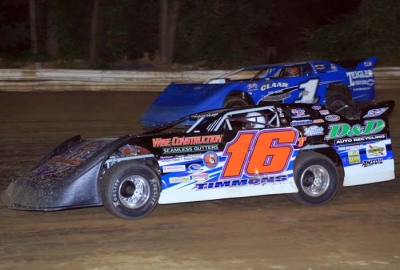 CUMBERLAND, Md. (June 13) – Doug Timmons came on strong in the latter half of the Dana Dove Memorial for the Cline Construction Steel Block Bandits Series to get a victory Sunday at Allegany County Speedway.

Timmons laid claim to the lead in the 30-lap feature two laps past the halfway point and drove away from runner-up Matt Sponaugle to win by 4.2 seconds. Timmons was the sixth different driver in six races to win in the Limited Late Model division, including an earlier race for the Bandits series.

Timmons, who started fifth, picked up just one spot in the first 10 laps then came to the front in the next seven laps to grab the lead after a two-lap, side-by-side race with Chris Harr.

Timmons picked up third from D.J. Troutman before a caution on lap 12. One lap later he got by Sponaugle for second and made the winning move over Harr on the low side on lap 17.

The race had seven cautions including three in the final six laps, one of which knocked Harr from the race after a collision on a restart. Timmons pulled away from Sponaugle over the last five laps.

Kyle Merkel secured third on the final restart with five laps to go and was the biggest gainer of the race after starting 15th. Joey Leavell finished fourth and Walker Arthur was fifth after starting 14th. Troutman lost two spots late in the race to finish sixth.