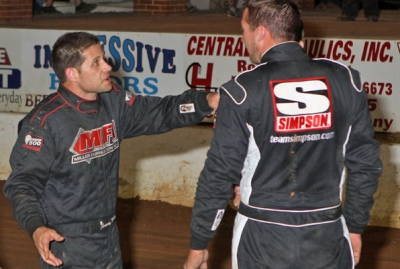 Heated words were exchanged between Frye and Miller in victory lane after the explosive finish that saw the pair battle and bang until Frye edged away at the finish. Miller settled for second with Vic Coffey of Caledonia, N.Y., Derek Byler of Belleville, Pa., and Eckert rounding out the top five.

The front-row starting Frye and Miller ran 1-2 virtually the whole race with Frye holding a comfortable margin before the race’s lone caution on lap 29. That allowed Miller to make a race of it the last 11 laps, and things got interesting in the final circuits.

When Frye hopped a slight cushion entering turn three with just over two laps remaining, Miller made a move under him to take command. But entering turn one the next time around, Frye dove back underneath Miller, sliding hard against Miller’s car as they bumped and scraped. Frye emerged as the leader and held on over the final lap.

"After having mechanical troubles last night at Port Royal and losing the race while leading, I wasn't gonna give this one away,” the 25-year-old Frye said. "We needed it badly, and I just wasn't gonna give it up. I got in there pretty aggressive, no doubt. I've received a door slam from a guy now and then, too. There was $5,000 on the line. I've never won a race that paid over $2,000, so it meant a lot to win it. ... and I ran as hard as I could possibly run.”

The 39-year-old Miller thought Frye ran too hard in the final laps.

“He made a mistake, and when you do that, you should have to pay for it,” Miller said. “I got past him and you have to settle for that. ... not just drive into the next corner and slam somebody's door to win the race. He's come a long way in the past two years, but that's not racing the way it's supposed to be done.”

Notes: Frye’s No. F1 is sponsored by Fryeco and L&B Investment Properties. ... Fast qualifier D.J. Troutman broke a motor taking his heat race victory and wasn't able to compete in the feature.