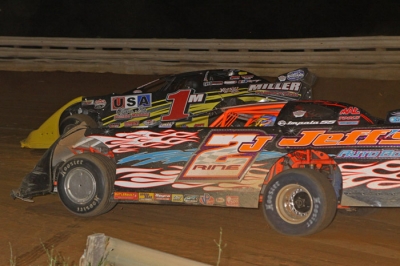 "It's good to finally win one of these races in the series,” said Miller, who moved up to second in the points chase behind leader Rick Eckert of York, Pa. "We’ve had a really good car and it's been frustrating. We were fast at Williams Grove and we were one of the only guys that could run the high side that night until we had steering troubles, and then we broke a shock at Winchester. We finally put a whole night together. It's so competitive. ... there’s just so many things that have to go right for you to win a race.”

Lathroum led early in the feature while 12th-starting Coleby Frye of Dover, Pa., stormed to the front, averaging a pass per lap before making a high-side pass of Lathroum. Miller followed Frye past the polesitter, dropping Lathroum briefly to third.

When Frye slowed in turn three with a broken rocker arm with 13 laps remaining, that handed the lead back to Lathroum, but Miller made his way around following the lap-27 restart and led the rest of the way.

Jeff Rine of Danville, Pa., challenged Miller late but settled for second while Eckert was third. Lathroum and ninth-starting Jason Covert of York Haven, Pa., rounded out the top five.

Notes: Miller’s MasterSbilt Race Car has a powerplant from Leggett Engine Research and sponsorship from USA Spares Inc. Precision Machining, Miller Fabrication and Speedwrapz.com. ... Miller won last year on the series at Selinsgrove (Pa.) Speedway. ... Coleby Frye, who led the most laps, has parked his car much of the season while assisting Delaware driver Austin Hubbard’s race team as a crew member. ... The tour wraps up Friday at Bedford (Pa.) Speedway.