Eckert outruns Richards for $5,000 at Winchester 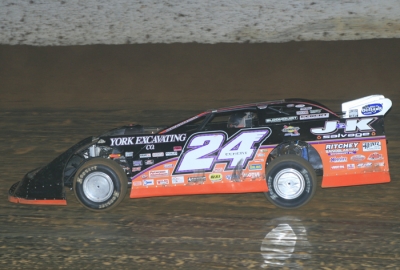 WINCHESTER, Va. (June 6) — Polesitter Rick Eckert of York, Pa., led every lap at Winchester Speedway for a victory in the second round of the CenturyLink Appalachian Mountain Speedweek. Eckert held off Josh Richards of Shinnston, W.Va., for the $5,000 victory. | AMS schedule| Slideshow

“I just ran a momentum line tonight,” said Eckert, who won an AMS event last year in Lincoln, Pa. "I seen (Richards) beside me several times coming off turns one and two, but I was really more worried about him at the other end of the racetrack because the line I was running at that end of the track was different than everybody else. It was a little slippery in turn two coming off the bottom, so I just let him have that lane and ran where I could keep the most speed.”

Richards, last year’s miniseries champion who piloted the Ernie Davis-owned No. 25, settled for second at the 3/8-mile oval. Jason Covert of York Haven, Pa., was third while Jimmy Mars of Menomonie, Wis., and Keith Jackson of Odenton, Md., rounded out the top five. Hometown driver Ronnie DeHaven Jr. started outside the front row but faded to an 11th-place finish in the Monday night special.

After an aborted start, Eckert took command early while Richards took the second spot from DeHaven on the sixth lap, with Covert dropping DeHaven to fourth a lap later.

Richards caught Eckert near the race’s midpoint, but Eckert was able to pulled away as the frontrunners maneuvered through lapped traffic.

A pair of cautions bunched the field and gave Richards a chance to challenge Eckert. He showed his nose a time or two in turns one and two, and once down the frontstretch. Eckert’s momentum fought off the low-side charges of Richards and he held on the rest of the way.