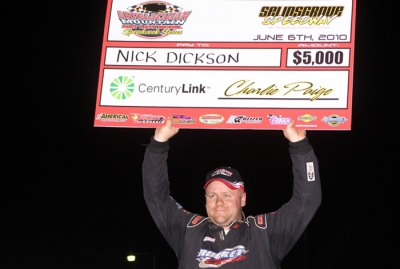 SELINSGROVE, Pa. (June 6) — Outside front-row starter Nick Dickson of Lewiston, Pa., outdueled polesitter Steve Campbell of Danville, Pa., on the first lap and never looked back in racing to victory on the CenturyLink Appalachian Mountain Speedweek at Selinsgrove Speedway. | Slideshow

Dickson earned $5,000 for a victory in what became the miniseries opener following Hagerstown (Md.) Speedway’s rainout on Saturday.

Sixth-starting Rick Eckert of York, Pa., cut into Dickson’s full-straightaway advantage after taking second on the 18th lap, and the race’s final caution bunched the field with 11 laps remaining. Dickson edged away from Eckert the rest of the way to win the 40-lapper by a half-straightaway at the half-mile oval.

"I needed restarts because we were running a little different tire compound than most of the others here tonight,” said Dickson, who used American Racer tires. "I was wanting a caution when that last one came out. It helped my car and also cleared the traffic on the racetrack so we had a clear path the rest of the way.”

Eckert settled for second with Jeremy Miller of Gettysburg, Pa., in third. Frankie Plessinger of Big Cove Tannery, Pa., and Campbell gave home-state drivers a sweep of the top five. Fast qualifier Jamie Lathroum of Mechanicsville, Md., who started ninth after the redraw, ended up seventh as the top-finishing non-Pennsylvania driver.

Jeff Rine of Danville, Pa., who had won five consecutive weekly events at Selinsgrove entering the race, ended up 10th.

Dickson notched his second richest payday of his racing career, earning half the $10,000 he won at Selinsgrove’s 2007 Paul Long Memorial.