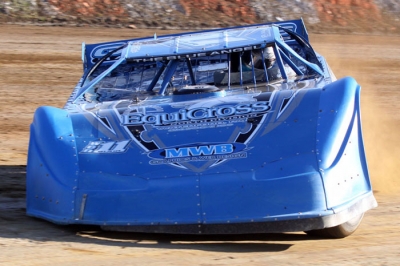 CLEARFIELD, Pa. (May 29-30) — Weekend-dominating Robbie Blair of Titusville, Pa., earned $5,000 Sunday at Central Pennsylvania Speedway by capturing the O'Reilly All Star-sanctioned Grizzly 50. The sixth-starting Blair took the lead from Boom Briggs on the 13th lap and led the rest of the way to collect the 50-pound, wood-carved Big Bear trophy. | Slideshow

Besides winning his second O'Reilly All Star feature of the season and third of his career, Blair also lowered the track record in qualifying and capturing the Battle of the Bear match-race competition during Saturday's prelims.

Satterlee started on the pole and led early while front-row starter Keith Barbara, John Britsky and Briggs battled for second early. After John Garvin spun for a lap-nine caution, the race's most serious happened on lap 10 when Matt Lux slammed the turn-two wall, and collected Canadian driver Darren Peters, whose car ended up on its roof. The drivers were sore but otherwise uninjured.

On the restart, Briggs took the lead from Satterlee, and Blair quickly dropped Satterlee to third as he worked the outside groove. Blair took control on the 13th lap but Briggs stayed with him through lapped traffic before a lap-26 yellow.

With Blair out front through the race's middle stages, the fifth-running Britsky retired with a vibration as the leader stretched his margin over Briggs. Barbara was the next to retire, pulling up lame with engine problems on the 34th lap.

Blair was strong on all the late-race restarts, including a lap-48 caution that set up a three-lap dash to the checkers. Briggs couldn't keep up and Blair raced solo under the checkered flag.