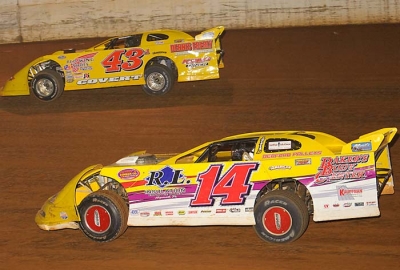 “I hope this isn’t a dream when I wake up,” Pencil said. “I’ve come here ever since I was 3 years old back in 1966 and watched all the sprint cars, Elmer Ruby, Irvin King and all those guys.

"I’ve come down here religiously and before my career ended, I wanted to win a race here especially after last year’s fire that devastated our whole team, my dad getting burned, and coming back. We fought hard all last year.”

The third-starting Pencil won a tight battle with Covert, who had captured the four previous series events at the historic half-mile oval. The polesitting Covert led 17 laps before Pencil slipped ahead on lap 18, but Covert regained command for the next 11 laps before the lead-swapping duel continued. Pencil took over for good on the 33rd of 35 laps, finishing .749 seconds ahead with the lapped car of Nathan Durboraw between the frontrunners.

“I’d like especially to say thanks to Denny Bonebrake. When I broke my wrist 10 to 15 years ago, Denny drove my car down here and he showed me how to get around this place,” Pencil said. “The Bonebrake family is a class act. If there was one race I could win at Hagerstown, I’m glad it was this one.

“When you beat Jason Covert, you’re beating one of the best in the country, that’s how much I respect Jason, so this is one of my best wins ever."

Notes: Pencil's Rocket Chassis is sponsored by Stoystown Auto Wreckers, Baker's Body Center and American Race tires. ... Among drivers failing to make the feature: Tyler Hershey, Alan Sagi, Ron Delano, Jim Yoder, Dylan Yoder, Tom Decker Jr., and Ronnie DeHaven Jr. ... Next up is Hagerstown is the opener on the Appalachian Mountain Speedweek. ... Next up for the Three State Flyers is a June 25-26 weekend at Hagerstown and Winchester (Va.) Speedway.