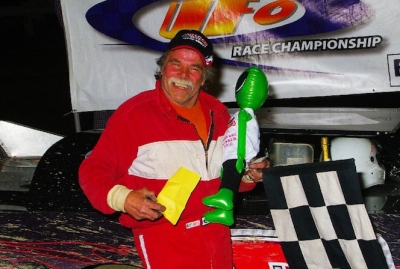 Mollick, of Toronto, Ohio, was leading the first feature when mechanical woes handed the lead to Banal, of St. Clairsville, Ohio, who led the final three laps. Mollick rebounded for a victory in the nightcap, leading all 22 laps. Each winner pocketed $1,500 as Banal notched his first PPMS victory since 2006 and Mollick captured his first-ever checkers at the half-mile oval.

In the opening feature, the UFO points-leading Mollick started on the front row and took command through a few early cautions, fighting off eighth-starting Banal into the late stages. Mollick edged ahead and appeared headed for victory when he lost his rear-end gears on the 19th lap, coasting to a stop. Banal inherited the lead and led the rest of the way to outrun hometown driver Mike Johnson and Brandon Burgoon of McDonald, Pa.

Mollick started on the pole of the second feature after a 13-car inversion and weathered several restarts while racing ahead of battles among Dave Wade, Ben Miley and 17th-starting Keith Barbara. Barbara moved into second on the eighth lap, but he couldn't catch Mollick at the finish. Barbara, of South Park, Pa., was second followed by Burgoon, the reigning track champion who made his first start of the season with a pair of third-place finishes.

Notes: Banal had a right-front flat tire in hot laps and hit the wall, but his crew made repairs, helping him to victory in the first feature. ... Banal drew for the inversion in the second feature, putting him 13th; he finished 10th. ... Keith Barbara finished second in the nightcap, but he was disqualified from the first feature; he twice tangled with Lynn Geisler then retaliated by making contact with Geisler's car as they entered the pits. ... Steve Baker and Jim Stephens both scratched for the night after having engine problems in hot laps. ... John Flinner had engine problems in his heat race and didn't run the features. ... Ben Miley advanced from 19th to seventh in the first feature. ... Jim Lepro was running second in the nightcap when he spun on the first lap. ... Sixth-starting Kyle Lukon won the Fastrak-sanctioned Crate Late Model feature. ... UFO competitors head to Thunder Valley Raceway in Central City, Pa., on May 22 for the Shawn McGarvey Showdown. ... ULMS drivers head for McKean County Raceway in East Smethport, Pa., on May 27.