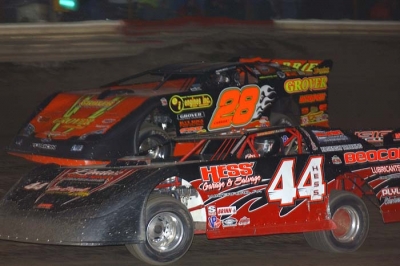 Hess outran Eddie Carrier Jr. of Salt Rock, W.Va., for the victory while reigning series champion Robbie Blair of Titusville, Pa., was third. Tim Dohm of Cross Lanes, W.Va., back in action after eye surgery, was fourth and Mike Knight of Ripley, N.Y., rounded out the top five. Polesitter Lance Elson of Wellsburg, W.Va., was 21st after dropping to the pits.

Elson and Carrier started up front with Carrier leading early and Hess quickly dropping Elson to third. Matt Miller slowed on the fifth lap to draw the first of two cautions, and Hess stayed with Carrier on the restart, taking command on the eighth lap.

Carrier kept the heat on Hess the rest of the way with Dohm and Blair also nosing into contention. After a lap-25 yellow for Darren Peters, Hess held on the final 15 laps for the victory.

Notes: Hess drives a Craiger-powered Rocket Chassis with sponsorship from Hess Garage and Salvage and Linda's Notary Service. ... Tim Dohm was back in the Tracy Seymour-owned No. 17 after several weeks on the sidelines because of eye surgery; his son Zack, who subbed for him during the break, also fielded a Seymour car, advancing eight positions to finish seventh. ... Matt Lux of Franklin, Pa., rallied from 22nd to 12th for hard charger honors. ... Several drivers had problems getting to the track, including third-place finisher Robbie Blair, who had to use a flatbed trailer after the clutch failed on his hauler; Cody Smith partially blocked the narrow and steep roadway leading to Hilltop when his hauler broke. ... The series heads to West Virginia Motor Speedway on Sunday for the $5,000-to-win Mark Balzano Memorial.