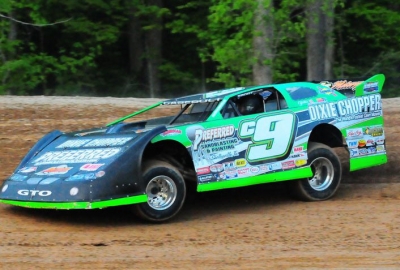 Steve Casebolt tunes up before his victory at Rocky Top. (southernohiosportsphotos.com)

COAL GROVE, Ohio (May 7) — Steve Casebolt of Richmond, Ind., led the final 38 laps of the unsanctioned Les Boggs 50 at Rocky Top Raceway for a $5,000 payday on Friday night in southeastern Ohio. Casebolt outran Eddie Carrier Jr. of Salt Rock, W.Va., for the victory.

Victor Lee of Stanford, Ky., was third followed by Justin Rattliff of Campbellsvile, Ky., and R.J. Conley of Wheelersburg, Ohio.

Casebolt led the first lap before Wayne Chinn of Bradford, Ohio, went out front to lead laps 2-12. When Chinn departed during a caution period with mechanical problems, Casebolt regained command and led the rest of the way, fighting off repeated challenges from Carrier.

"Eddie runs extremely well here and has won a lot of races at this track, so we knew he would be tough," Casebolt said. "I knew if I didn't make any mistakes it would be hard for him to get around me, so I just kind of played it cool and took my time in order not to make any mistakes."

Fast qualifier Jeep Van Wormer of Pinconning, Mich., got caught up in an early scramble and departed with a broken radiator, and reigning track champion Jackie Boggs of Grayson, Ky., making his first start since being injured in a September accident at Portsmouth (Ohio) Raceway Park, won the consolation race and finished 17th.

Notes: Casebolt's Rocket Chassis is sponsored by Dixie Chopper and Preferred Sandblasting & Painting. ... The event drew a near-record crowd. ... The next Super Late Model special at Rocky Top is set for June 18 for the $4,000-to-win GCP Engines Showdown.