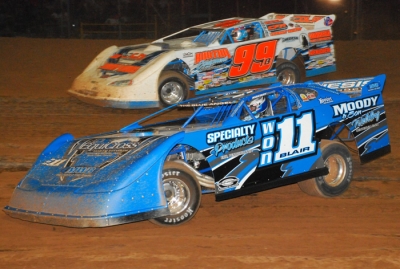 SARVER, Pa. (April 30) — Reigning series champion Robbie Blair of Titusville, Pa., got his O'Reilly All Star Series season off to a solid start Friday at Lernerville Speedway with a $5,000 victory in the Showdown at Sarvertown.

Blair, who started sixth, got to the front by the fourth lap and spent the middle stages of the 50-lapper trying to regain the lead from Boom Briggs of Bear Lake, Pa., the winner of last year's series opener at Lernerville. | Slideshow

After Blair dispatched of Briggs, Dave Hess Jr. of Waterford, Pa., turned up the heat in the closing laps, but Blair turned him back and raced to the checkered flag for his second career victory on the series, which is beginning its second season.

The ninth-starting Hess settled for second with polesitter Jason Covert of York Haven, Pa., in third. Briggs, who led the most laps, was fourth and 12th-starting Jared Miley of South Park, Pa., rounded out the top five in the series opener. Matt Lux of Franklin, Pa., battled among the top five before an overheating car forced him out.

Davey Johnson of Latrobe, Pa., started outside the front row and led the first lap, but Blair was out front by lap four and led nine circuits until Briggs took command on lap 13. The Briggs-Blair battle continued up front for several laps while Hess, Miley and others worked their way toward the front.

On a restart with 12 laps remaining, Blair worked past Briggs, who ended up losing two more spots the rest of the way. Hess went to work on Blair, pulling alongside and being credited with leading a lap late before Blair edged back ahead to complete his victory.