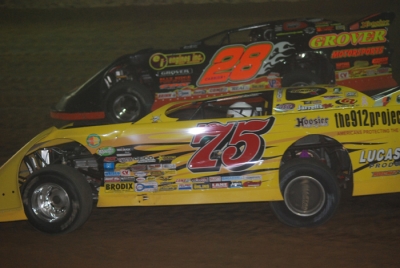 ALMA, Ohio (April 30) — When Eddie Carrier Jr. of Salt Rock, W.Va., is looking for his first big purse victory of the season, he doesn't have to look farther than a visit to K-C Raceway.

Carrier continued his string of success at K-C on Friday with a flag-to-flag victory in the inaugural Ralph Seymour Memorial, pocketing $5,000 in the unsanctioned 47-lapper. The victory was the fourth straight season Carrier earned his first $5,000 or richer victory of the season at the 3/8-mile oval south of Chillicothe. | Notebook | Turn-three sidebar | Slideshow

This time, Carrier started outside the front row fought off a fierce challenge from runner-up Bart Hartman of Zanesville, Ohio, following a lap-36 restart as the frontrunners were side-by-side most of three laps before Carrier edged ahead to win by a half-straightaway.

"The last two or three years, this place has been pretty good to us," said Carrier, who notched his sixth victory of $5,000 or more at K-C since 2007. "It seems like we unload here and we're just good. ... just coming here and racing and just getting used to the surface."

Hartman, who started third, gave it everything he had on the restart with 11 laps to go, trying to make a low-side pass before falling back in line behind Carrier, who said he played it conservative on the final restart.

"You kind of watch yourself on the first lap. You don't want to make a stupid mistake and slip up," the winner said. "I kind of took it a little easy on that restart, and then after we got running and my tires came in a little bit better, than I hit a good corner down there in (turns) three and four and I didn't see him any more.

"Those last five laps, I kind of saw what I had left (regarding tire wear), and I started trying to run a little bit harder than what I'd been running."

Hartman found it difficult to steer when the air of Carrier's car would cause an "aero push," but he just wasn't quite good enough.

"Our car was better than his in (turns) one and two, and he was killing me off of (turn) four. Everything I gained in one, I lost in the other," Hartman said. "We just need to be a little bit better."

Eighth-starting Steve Casebolt of Richmond, Ind., was further back in third while Rick Combs of Cincinnati, Ohio, and polesitter Jason Montgomery of Jackson, Ohio, rounded out the top five after slipping back on the first lap.

Jeep Van Wormer of Pinconning, Mich., who entered the event with victories in his previous three races, has his eye on four straight after rallying from 10th to second on lap 21. But Van Wormer slipped off the backstretch and lost control on lap 24, sliding into a turn-three berm and tire barriers and out of contention. He restarted on the tail and ended up ninth.

"I was seeing four for a minute there," Van Wormer said of his victory streak, but he never got to Carrier after crashing while battling Hartman for second. "(Hartman) came back up to me in that middle, and we were side-by-side and I just tried to give him some room and got too far out."