Wilmoth gets UFO victory at Tyler Co.: 'I'm back!' 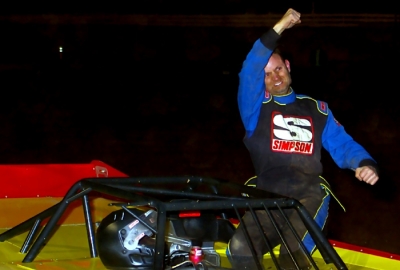 In victory lane, the driver who missed much of the '09 season with severe back problems climbed out of his No. B1 and had a simple message for the crowd: "I'm back!"

Dalton, who started on the pole and led the first 20 laps, fell from contention on the 35th lap when he tangled with the slower car of Donnie Dotson while battling for second.

Dalton, Horton and Wilmoth made up the top three early in the race, edging from the field with Horton pressuring Dalton. Wilmoth slipped past Horton to take second in turns one and two on the fifth lap and he began chasing Dalton.

John Mollick's overheating car brought out a lap-20 yellow, and Wilmoth pounced on the restart, taking control and quickly building a 10-length margin on Dalton, who suddenly had his hands full with Horton, Hawkins and Zack Dohm.

Dalton's lap-35 incident also collected Carrier, and they restarted on the tail while Wilmoth went back to work, pulling away from the field once again. Dalton's race was over on lap 40 when he dropped to the infield.

Scott worked his way to the front, taking second with five laps remaining while Miley overtook Horton on the final lap to finish third. Carrier recovered in the final laps to finish fifth.

Notes: Wilmoth's Rocket Chassis has a J.R. engine and sponsorship from Adkin’s Timber, Lone Pine Operating, Huffman Corp., Sunoco and NAPA Auto and Truck Parts. .... The event drew 28 drivers from four states. ... UFO's previous Tyler County winners were Zack Dohm ('09) and his father Tim Dohm ('08), who is sidelined because of problems with his right eye that require surgery. ... After a four-week break, UFO competitors return to action with twin features on May 15 at Pittsburgh's Pennsylvania Motor Speedway.