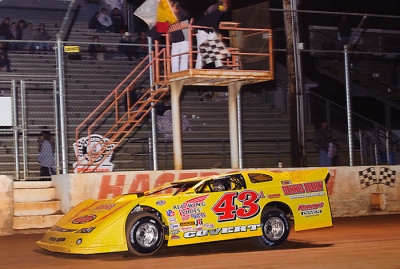 HAGERSTOWN, Md. (April 10) — If it's a Three State Flyers event at Hagerstown Speedway, count on Jason Covert in victory lane.

After winning three series races last season at the half-mile oval, Covert was back in form Saturday at Hagerstown, leading all 35 laps and cruising to victory with more than a half-track margin on the field to earn $3,000. | Slideshow

“The credit has to go to the crew, my owner and my wife,” said Covert of York Haven, Pa. “I want to dedicate this to my wife. We lost one of her grandmas while the other grandma was in the hospital last Saturday. ... It’s been a pretty hard week for everybody in our family.”

Covert started outside the front row and was never headed, pulling away for good after a lap-12 restart and stretching his lead over the 24-car field. He had a 6.7-second advantage by lap 25 and ended up taking the checkered flag ahead of fellow York Haven driver Billy Wampler by more than 10 seconds.

“All the credit goes to the crew, this is their win,” Covert said. "I told the guys this is the best the track has been in a feature event in 10 years. We couldn’t ask for a better racetrack.”

Gregg Satterlee of Rochester Mills., Pa., who started outside the seventh row, overtook multitime track champion Roy Deese Jr. of Odenton, Md., on the final lap to finish third while Frankie Plessinger of Big Cove Tannery, Pa., rounded out the top five. Jeremy Miller of Gettsyburg, Pa., was running in the top five but retired on the 12th lap with mechanical problems.

The race's most serious incident came on the second lap when second-row starters Rusty Sites and Mike Knight got together and piled into the turn-three fence. Jamie Lathroum, Friday's series winner at Williams Grove Speedway, was also caught up in the wreck and unable to continue.