Knight rallies from 15th for UFO victory at Mercer 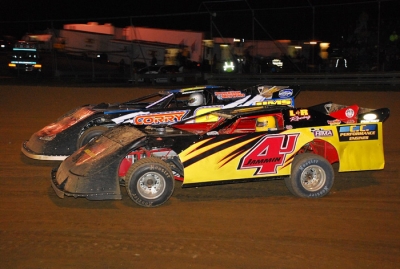 MERCER, Pa. (March 27) — Going ahead on a lap-26 restart, Mike Knight of Ripley, N.Y., completed a rally from his 15th starting spot for a victory in the season-opening UFO Race Championship Series event at Mercer Raceway Park. Knight earned $2,500 in the Chiller Thriller in capturing his first-ever series event. | UFO notebook | Slideshow

Knight broke into the top five by the 14th lap, took the second spot on lap 16 and stalked leader John Mollick of Toronto, Ohio, through the 41-lap race's middle stages. Knight pulled inside Mollick on the frontstretch at lap 25, but Mollick kept his edge at a lap-26 caution. On the restart, Knight used the outside groove to take control, and he edged away after the race's final caution on lap 33.

Polesitter John Flinner of Zelienople, Pa., led the first two laps and ended up seventh while fellow front-row starter Dave Murdick of Slippery Rock, Pa., got into the wall on the first lap and was the race's second retiree.

Notes: Knight's Craiger-powered Rocket Chassis is sponsored by Keypointe Realty, Jay's Auto Wrecking and Ottaway's Auto Body. ... Jared Miley of South Park, Pa., who started 14th, was battling for a top-five spot late in the race when he drew the last of several yellow flags on lap 33. ... Drivers failing to qualify for the main event: Ray Kroll, Ben Porter, Dennis Lunger and Justin Kreider. ... Next up for UFO competitors is a $5,000-to-win event on April 17 at Tyler County Speedway in Middlebourne, W.Va.