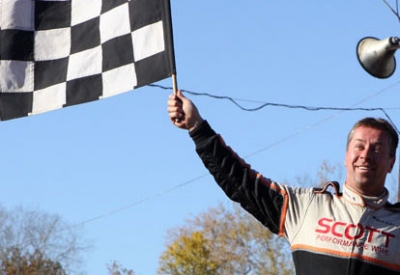 “I have to dedicate this to Raye Vest,” Eckert said in victory lane. “He’s a long-time car owner and in the hospital and possibly might have to be operated on tomorrow. Hopefully this good luck carries over to him tomorrow."

D.J. Myers of Greencastle, Pa., beat the polesitting Eckert off the line to lead, but mechanical problems on the 14th lap sent Myers out of the race.

Eckert took over with Jason Covert, Josh Richards, track champion Roy Deese Jr. and three-time Octoberfest winner Gary Stuhler giving chase, and the top five remained that way through the 75th lap when, like last year, Richards had a flat to bring out the caution.

Into the final 25 circuits, Eckert stretched his lead to more than two seconds over Covert while it was more than three back to Deese. But Covert began visibly closing and was to less than a second when the final caution was displayed on lap 91.

Eckert was up on the wheel the remaining circuits as Covert no longer could smell his exhaust and saw Eckert pulling way by each circuit until crossing the line by 4.75 seconds ahead. Covert, of York, Haven, Pa., settled for second with Deese, Stuhler and Vic Coffey rounding out the top five.

"We made some changes to the car," Eckert said. "Racing around here with these guys is tough. This is some of the best local racing in the country. All these guys are tough. Coming back here, the car has to be a little bit different. This car is really good on hard slick racetracks when we have to run those long races.”