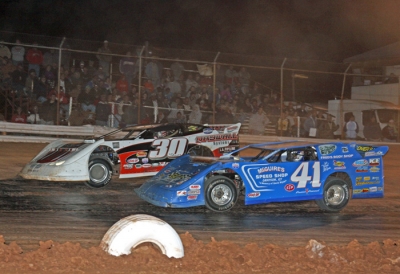 STEWART, Ohio (Oct. 11) — Winning duels with Steve Shaver and Rob Blair, Josh McGuire of Grayson, Ky., led the final 14 laps of the 26th annual Harvest 50 at Skyline Speedway. McGuire totaled $7,500 on the weekend of unsanctioned of racing, $5,000 for Sunday's victory along with $1,500 for Saturday's tuneup victory and a $1,000 bonus for his sweep. | Slideshow

"I was just hoping (for) no cautions," said McGuire who also won last year's Harvest 50. "We set the car up a little loose and knew it would tighten up if I got some heat in the tires. Steve and I and Robbie had a great thing going there for a while. I'm glad to get the win. Somehow we always manage to find a way to win here, but winning tonight is a big deal for us."

Blair led the first 11 laps before Shaver took command on the 12th lap. He was out front 15 laps with Blair and McGuire hounding him all the way. McGuire slipped by to lead lap 29, but Shaver battled back for a lead-swapping duel over the next several laps. When Shaver worked McGuire on the high side on lap 37, his suspension problems forced him out of the race.

Blair couldn't keep up with McGuire the rest of the way but was able to hold off Dohm for the second spot.

"We had a good setup, but not a great one," Blair said. "Josh and I got together, and the car just didn't turn as well after that. I probably knocked it out of tow just a little, but we like this track and are glad to come home second."