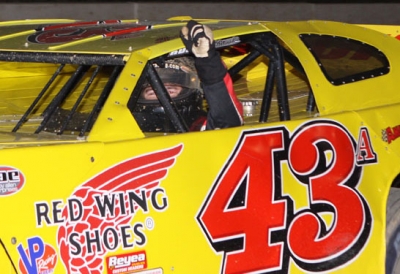 HESSTON, Pa. (Oct. 11) — Jason Covert’s steady march forward put him out front before halfway and he outlasted the field to win the Rumble by the Lake 88 at Hesston Speedway on Sunday night.

Covert, of York Haven, Pa., started seventh and moved up to challenge leader Keith Jackson by lap 26. After several laps of hard racing with Jackson, Covert was in command and on his way to a second $10,000 victory in a week. | Slideshow

A sunny afternoon gave way to a frosty evening in time for feature action to heat up for the Huntingdon County oval’s season finale. Jackson. of Odenton, Md., jumped out in front of Jack Pencil of Bedford, Pa., and Nick Dickson of Lewiston, Pa., in the first several laps of the 88-lap Super Late Model main event. Covert cracked the top five with Russ King of Bristolville, Ohio, in the first handful of laps.

Jackson hit lapped traffic quickly and was closing in on a pack of cars when the first caution slowed the pace on lap 24. Covert came alive on the outside when the race resumed, moving from fourth to second in the next two laps.

He shot to the outside of Jackson and held his line for several laps, watching Jackson edge ahead from the inside lap after lap. The impasse ended with Covert sneaking ahead out of turn four on lap 35.

Before and after the fuel stop at lap 41, Covert’s lead was secure by several lengths but Jackson never faded too far and Josh Richards of Shinnston, W.Va., entered the picture. Richards, who started 13th, came into the top five at lap 61 and closed in on Jackson with 20 laps to go.

Richards’ late push on the outside ended up short, however, as Covert hit the finish line with Jackson in tow. Behind Richards, Pencil finished fourth and Dickson got fifth.