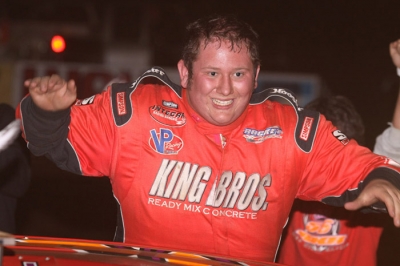 King inherited the lead on the 30th lap when a flat tire sent polesitter Chad Valone of Warren, Pa., spinning, and then fought off late challenges from veteran Dick Barton of Ashville, N.Y., who settled for second. Brent Rhebergen of Clymer, N.Y., was third followed by Bump Hedman of Sugar Grove, Pa., and Dave Hess Jr. of Waterford, Pa. Valone ended up 10th in the 50-lapper postponed a week by rain.

On the lap-three restart, Valone took control with King, Barton and 12th-starting Mike Knight of Ripley, N.Y., in pursuit. After Chris Hackett's lap-eight spin, Valone began stretching his lead over King before Gregg Satterlee drew a lap-18 yellow before retiring.

Valone went back to work and was pulling away at the halfway point, but disaster struck the leader when his left-rear tire went flat rounding turn four, causing a spin that knocked him from the lead.

King inherited the point with Barton in second and Knight moving past Rhebergen on lap 33 to grab the third spot. But Knight's run ended six laps later when he stopped in turn four simultaneously with Bob Close, who wrapped up the ULMS championship despite finishing 17th.

Barton lined up behind King for the final restart, but he'd get not closer the rest of the way as King raced to his first full-fendered victory.